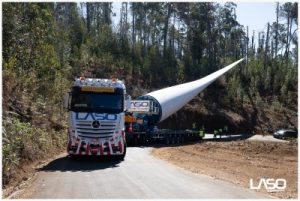 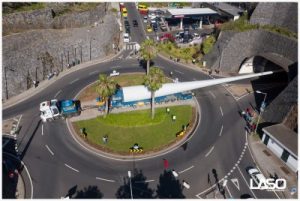 LASO TRANSPORTES S.A. is preparing to transport various wind components to the Alecrim-Urze Wind Farm in Paúl da Serra, on the island of Madeira.

LASO is a national and international transport company specializing in the provision of road transport services for special goods, making this type of transport of wind components part of its daily routine.

In a total of 12 wind blades with 67mt each, their transport on the island of Madeira is divided into 2 phases. In the first phase, the transport will be done in a conventional way, whose route starts in Porto Caniçal until Ribeira Brava. In the second phase, the transport will be carried out using the Blade Lifter equipment. This equipment, in addition to playing a determining role when there are winding roads, tight curves, populated areas, and abnormal inclinations, allows to lift the transported wind turbine up to 60º of inclination, as well as to rotate 360º on its axis. The transportation of the 4 generators, each weighing 120 tonnes, will be carried out in 4 phases due to the complexity of the route and the requirement for the works of art to be crossed. Between the phases, 3 different transport compositions with a maximum length above 70mt will be used. In the transport of each generator, 2 to 3 trucks will be used to draw the respective trains and overcome the steep climbs that characterize the island.

The first phase of transport of the generator will start in Porto Caniçal until the entrance of VR1; the second phase will be from the entrance of VR1 to Ribeira Brava; the third phase between Ribeira Brava and Prazeres and the 4th and last phase between Prazeres to the Alecrim Urze Wind Farm. Given the dimension of this transport, some preventive measures will be necessary, such as the total cutting of roads, intervention in 8 roundabouts and diversion, when necessary, of electrical wires. Complying with these procedures is a determining factor, in order to safeguard everyone’s safety. The start of this operation is scheduled for next Friday, February 14 at 10:00 pm and will take place for at least a month and a half. This operation will involve about 8 trucks, 38 axle lines for the transport of each generator, 1 Blade Lifter, 18 LASO employees and 20 PSP agents.

LASO’s involvement in this project is to contribute to increasing the supply of energy to Madeira Island. LASO Transportes, Overcoming Obstacles!

CONTACTS
ASK FOR A QUOTE
Media

This website uses cookies to improve your experience while you navigate through the website. Out of these cookies, the cookies that are categorized as necessary are stored on your browser as they are essential for the working of basic functionalities of the website. We also use third-party cookies that help us analyze and understand how you use this website. These cookies will be stored in your browser only with your consent. You also have the option to opt-out of these cookies. But opting out of some of these cookies may have an effect on your browsing experience.
Necessary Always Enabled
Necessary cookies are absolutely essential for the website to function properly. This category only includes cookies that ensures basic functionalities and security features of the website. These cookies do not store any personal information.
Non-necessary
Any cookies that may not be particularly necessary for the website to function and is used specifically to collect user personal data via analytics, ads, other embedded contents are termed as non-necessary cookies. It is mandatory to procure user consent prior to running these cookies on your website.
SAVE & ACCEPT